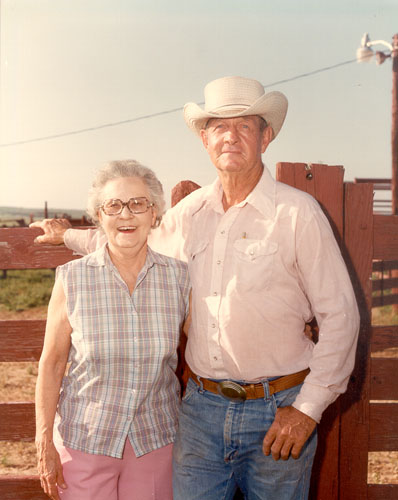 of Philip, South Dakota, died on Sunday, February 1, 2004 at the Philip Nursing Home in Philip at the age of 87

Edna Brandon was born May 26, 1916 at Blackwell, Texas, the daughter of Samuel and Minnie (Landreth) Brandon. She grew up and received her education in Vernon, Texas.

Edna was a member of the Methodist Church.

Grateful for having shared her life are her son George Dennis and his wife Shirley of Philip; two daughters Patricia Law and her husband Jack of Martinsburg, West Virginia, and Barbara Gail Haisten and her husband Tom of Hobbs, New Mexico; six grandsons; three granddaughters; twenty great-grandchildren; one brother Richard Moorehead of Sweetwater, Texas; several nieces and nephews; and a host of other relatives and friends.

Edna was preceded in death by her husband Dolph Dennis on February 10, 1999; her parents; one sister Boots Blackwell; and one brother Jack Brandon.

Visitation was held 2:00 p.m. to 6:00 p.m. on Wednesday, February 4, at the Rush Funeral Home in Philip, and one hour preceding the services at the church on Thursday.

Funeral services will be held 10:00 a.m. Thursday at the United Church in Philip, with Pastor Al Brucklacher officiating.

Interment will be in the Masonic Cemetery, Philip, South Dakota

FUNERAL SERVICES
Thursday, February 5, 2004 10:00 a.m.
United Church
Philip, South Dakota
CLERGY
Pastor Al Brucklacher
MUSIC
Jo Anne Stilwell – Pianist
Debbie Hansen & Pat Krogan – Vocal Duet
"In The Garden"
"On Eagles’ Wings"
USHERS
Edsel Roe - Frank Myers
PALLBEARERS
Lee Dennis – Kirk Dennis
Reo Dennis – Edsel Roe
Doug Haisten – Frank Myers
HONORARY PALLBEARERS
All Relatives and Friends in Attendance
INTERMENT
Masonic Cemetery
Philip, South Dakota
I needed the quiet, so He drew me aside –
Into the shadows where we could confide;
Away from the hustle where all the day long
I hurried and worried when active and strong.
I needed the quiet, though at first I rebelled,
But gently, so gently my cross He upheld,
And whispered so sweetly of spiritual things, -
Though weakened in body my spirit took wings
To height never dreamed of when active and gay.
He loved me so gently, he drew me away.
I needed the quiet, no prison my bed
But a beautiful valley of blessing instead;
A place to grow richer, in Jesus to hide
I needed the quiet, so He drew me aside.