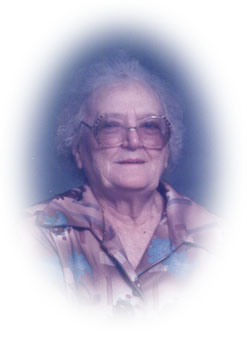 of Philip, South Dakota, died on Friday, December 27, 2002 at the Hans P. Peterson Memorial Hospital in Philip at the age of 94

She was united in marriage to Gerhardt William Hespe on October 4, 1927 in Kadoka, SD. They farmed and ranched in the Milesville area until 1968 when they retired and moved into Philip. Her husband preceded her in death on December 19, 1970.

Beulah continued to make her home in Philip and in July 1989 she moved into the Senechal Apartments and in 1998 she moved into the Philip Nursing Home. She was a member of the Redeemer Lutheran Church and the Bad River Senior Citizens Center, both of Philip.

In addition to her husband, Gerhardt, she was preceded in death by a daughter, Irene Fairbanks; a grandson Steward Hespe; her parents; six brothers, Richard, Jason, Raymond, Donald, Leo, and Lester Dunham; and two sisters, Ethel Huber and Evelyn Schmelzel.

Visitation was from 2:00 p.m. to 6:00 p.m. on Monday, December 30 and one hour preceding the services at the church on Tuesday.

As we travel through life, we are presented with opportunities to extend a hand to someone less fortunate than ourselves. Often, those opportunities will have a lasting effect on the recipient of our helping hand.

During the most influential years of my life, grandma extended her hand to me. She opened her home to me and provided me love, nurturing and taught me how to persevere. She encouraged me to be successful regardless of the odds, obstacles or challenges. She gave me hope, drive, determination and a will to succeed. She gave, because she cared.

Regardless of the strength or size of our hand, we have opportunities to make a difference in someone’s life. As we move forward, I challenge each of us to look for opportunities to acknowledge a deed well done, thank a neighbor or friend, praise a child, tell a senior thanks, or extend a hand to someone less fortunate than ourselves.

Grandma, thank you for extending your hand, I’m forever grateful.