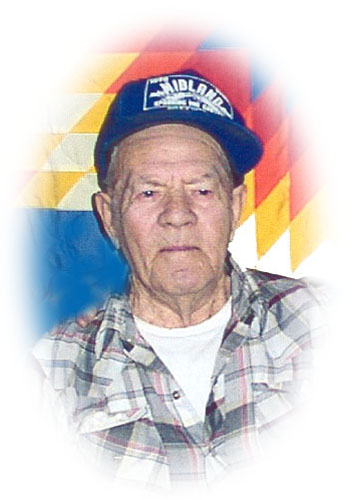 Robert L. Marrington, better known as "Bob" to his family and friends, was born January 19, 1920 at Philip, South Dakota, the son of Fred "Ted" and Ada (Schwartz) Marrington.

He grew up on a farm-ranch in the Milesville area and attended school in that community. As a young man he worked for various farmers and ranchers near Milesville. Later he moved to Oregon where he worked for two years before returning to Haakon County.

Robert was united in marriage to Pauline Petoske on June 3, 1944 at Philip, South Dakota.

Bob enjoyed the outdoors, especially horseback riding, playing baseball, fishing, hunting and listening to music. He enjoyed working with his livestock and farm machinery. His later years were spent visiting with his family and many friends.

Mass of Christian Burial for Robert L. "Bob" Marrington was celebrated 10:00 a.m. MDT on Monday July 14, 2003 at St. William’s Catholic Church in Midland with Father Dale Kutil as the Celebrant.

Interment will be in the Midland Cemetery.

Vocalist
Barb Jones
"How Great Thou Art"
"Join In The Dance"