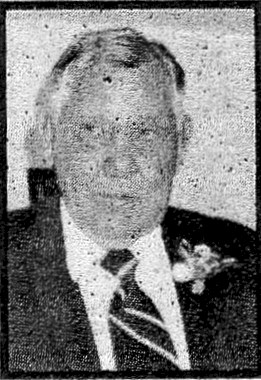 Carl James Buchholz better known to his family and friends as "Pinky", was born June 26, 1917 at the family homestead near Ottumwa, South Dakota, to parents August and Josephine (Horan) Buchholz.

He grew up and attended school in the Ottumwa area and as a young man he worked on the family ranch and for various ranchers in that area.  In 1936, he worked for the C.C. Camps in Pierre and Chamberlain for two years and in 1939 he did earth dam building and construction work with his brother, Leo, in Haakon County.

In 1941, Pinky enlisted in the U.S. Army and served in the Pacific Theater where he received a Purple Heart in November 1944.  Following his discharge from the army in 1945 he worked for 5 years in a chemical plant in South San Francisco before returing to the Philip area.  He then worked construction for his brother-in-law, Joe Gebes, before becoming injured.

On October 6, 1961, he was united in marriage to Agnes Lamm at Cottonwood, South Dakota.  The couple then made their home in Philip.

Pinky worked as a bartender and for Scotchman Industries before his retirement.  He worked at Morrisons Pit Stop following his retirement and enjoyed making people happy when he had the opportunity.

He also enjoyed watching baseball, and just driving around the countryside, taking in its beauty.  Pinky was a member of the Sacred Heart Catholic Church, Bad River Senior Citizens Center, Wheeler-Brooks American Legion Post #173, and the VFW Post #3069, all in Philip and was a member of the DAV and Eagles in San Mateo, California.

He was preceded in death by his parents; two brothers, Leo and August Otto; two sisters, Margaret Sandal and Helen Gebes.