Virginia Johnson was born August 29, 1917, in Sioux City, Iowa, the daughter of Knute Napoleon and Effie Carolyn Johnson. She grew up in Sioux City, and graduated from East High School in 1935. She then attended Morningside College in Sioux City, where she earned her teacher’s certificate. She taught 3rd Grade in Sioux City. During WWII, Virginia was an aircraft communicator for the Civil Service and worked at the Philip Airport, assisting with planes crossing the U.S. She then taught 7th grade, for one semester at Philip School in 1945.

Virginia was united in marriage to Sherman Burns on December 29, 1945, at Sioux City, Iowa. She stayed home to raise her sons. In 1965 to 1970, she worked as Deputy Auditor for Haakon County.

In 1970, she taught at Old Trail Rural School north of Philip, and during this time she returned to summer school at Black Hills State, where she received her BS degree in 1972. She taught at Philip Elementary from 1972 until 1992. After retiring she volunteered at the grade school until 1998.

During her lifetime, Virginia was very active in the community. Her memberships include First Lutheran Church, where she was on the church council and altar guild, Sunday School Superintendent, Teacher, and Reader. She also was a Girl Scout Leader, and Past President of the Hospital Board, and a judge for Junior Miss, 4-H, and Declam. She received the PTA Lifetime Award and the Teacher of the Year at the Haakon School District in 1984-1985. Virginia was also a member of the Order of Eastern Star, where she served as Secretary and Worthy Matron.

Virginia was preceded in death by her husband Sherman Burns on July 22, 1968; her parents; and two brothers Bob and Edward Johnson.

Visitation was held 4-7 p.m. on Tuesday, October 2, at the Rush Funeral Home in Philip, and one hour preceding the services at the legion hall on Wednesday.

Sherm and Colin and family....so very saddened to read of Virginia's passing. I have so many memories of her that include neighborhood, church, and school. The memories all resound with her kindness, intellect, and sensitivity. She touched so many lives. Her impact on children will be a lasting legacy to her. Take care and God bless.

~ Nancy Seager Ekstrum Philip (9/30/2012)
To all of Virginia's family~
I am very sorry to hear of your loss.
When I came to the Haakon School district 22 years ago, Virginia was in the process of 'liquidating' years of accumulated teaching resources. She was so kind in 'setting up the greenhorn' with all kinds of materials! There were very few books that I started my teaching experience with that DIDN'T have "Virginia Burns" written inside the cover!
She will have had so much influence on many many children in the district!
Bless her memory and all your family.
~ Vonda Hamill Milesville (9/30/2012)
I am so sorry to hear of Virginia's passing. As I reflect back I don't know of any better example of a person who absolutely chose the right career path. She was such an influence on all her students, and taught generations in the Philip community. I will treasure the lessons she taught me as a teacher and the visits we had as adults. She was truly a remarkable lady and I'm thankful to have known and loved her. God Bless Virginia and all her family.
~ Stacey Kennedy Sharp Rapid City (9/30/2012)
My sincere condolences to your family during this most difficult time. May your special memories help you to cope in the days ahead and may the God of all comfort soothe the pain in your hearts with his promise of a future resurrection.--John 5:28, 29
~ Angie Perry 26450 Chardonview Dr., Cleveland, Ohio 44143 (9/30/2012)
I am sorry to here about Virginia. She was a total delight to know. I had the pleasure to get to know her pretty well the last couple of years. I was the bath aide at the Nursing Home. She has known my family for years so we had a lot to talk about. My grandparents were George and Alice Hendrickson. She will be missed. Keep all of the good memories close and with you they help the healing. Our prayer are with all of you.

~ Karen Nelson Philip, SD (9/30/2012)
To Virginia's family: I was so sorry to hear of Virginia's passing. I always recall her as a kind lady. She was a lower-grade teacher for two of our children and she was special. She will be missed but the lessons she shared with children are a wonderful legacy.
~ Joel Peterson Faith, SD (9/30/2012)
So sorry to hear of Virginia's passing. She was such a wonderful friend. I was helped out alot by her when I first started by teaching career, she always had ideas that worked and she was such a sweet person always lending a helping hand to anyone that needed it. I attended her 90th birthday party and she was looking forward to having a 100th birthday. Such a sincere lady that will be greatly missed. She touched so many lives and was a terrific teacher.My prayers are with the family.
~ Amelia Hurley Philip (9/30/2012)
Sherm & Colin so sorry to hear about your mom used to visit her when i went to see my mom. Another mom from the old neighborhood has passed, have many graet memories of your mother and growing up around her. She made many friends and taught lots of life lessons during her time on this earth. I shall miss her.
~ Mike Hart Emerado ND (9/30/2012)
Sherm, Colin and family, my sympathies on your mother's death. What a lovely, positive and dynamic woman she was. She always had a smile for me, no matter if years past in OES, church, circle, or when I would be in the nursing home at functions in the more recent past. She made others feel welcome and I can only imagine how students felt. What a dear lady.
~ Kay Foland Rapid City (9/30/2012)
Dear Sherman, Colin and family, I just want you to know that our hearts go out to you during this time. Your mom was a one of a kind person and educator. She gave her whole life to others and their needs. She was a great role model and mentor to all....not a bad legacy! I can still see her smile and hear her gentle voice!
~ Judy (Kennedy) Goldhammer Wall, SD (9/30/2012) 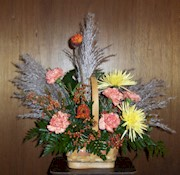 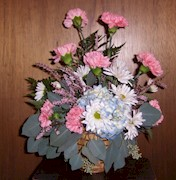 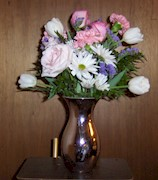 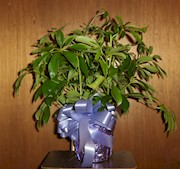 One Fine Day - Debbie and Lois 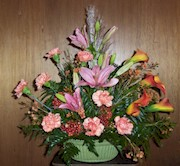 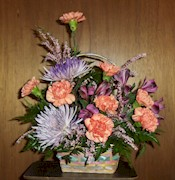 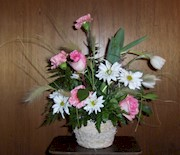